2 gold medals for Cierzo in the last Spanish Beer Championship

If in the last edition we were winners of the prize for the best beer, with Maglia Rosa, this year we are just as happy, since we return from the eighth Spanish Beer Championship with two gold medals in important categories and with a lot of competition.

On December 11, the “Campeonato de Cervezas” awards ceremony took place with the participation of more than 400 beers, made by 60 breweries and judged by 35 professional judges through blind tastings. A ceremony that took place at the facilities of the Burgos brewery Siesta.

After 4 tasting sessions, the judges delivered their verdict, awarding us a gold medal in the highly contested Specialty Double IPA category, which includes styles such as Hazy Double IPA, New England Double IPA, DDH DIPA, Black, Red, etc, for Voodoo, our recent collaboration with Oddity Brewing, with Azacca, Mosaic and Citra hops. As we say, it is an honor to have won the award for the best beer in this category, since it is one of the most repeated, demanded and valued styles by craft beer drinkers in recent years. The silver went to Basqueland and the bronze to La Verbena.

It wouldn’t be the only medal, as our Festbier, Prost!, also won gold in the Pale Malty European Lager category, ahead of Sevebrau and Grahame Pearce. Another great joy, for being a classic style that we brewers love and for which we have some luxury collaborators: La Font del Diable and Les Clandestines. In addition to a well-deserved recognition of the effort made by our brewers Sergio Ruiz and David Laguarda throughout this year. 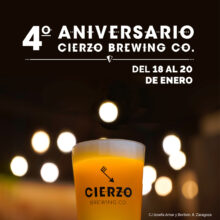 Friday January 13th, 2023 Our brewpub in Zaragoza turns 4 these days.

Indeed, 4 years have already passed since we decided to open the first brewpub in Zaragoza. Concept that is still new in Spain, combining a...

If in the last edition we were winners of the prize for the best beer, with Maglia Rosa, this year we are just as happy, since we return fro...